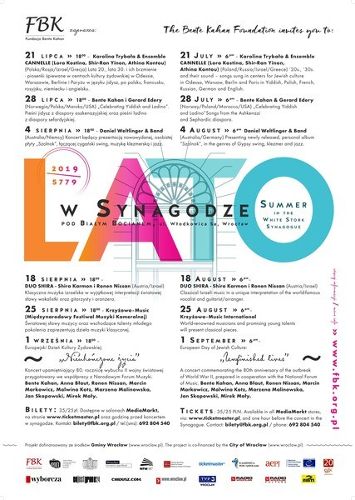 13th musical Summer in the Synagogue under White Stork. A cycle of concerts by European artists presenting the musical wealth of national minorities.

On 21st July, the 13th musical Summer in the Synagogue under White Stork will start. This annual festival consists of a cycle of concerts by European artists presenting not only the musical wealth of national minorities, but also the influences of klezmer music and folk music on other genres, such as avant-garde or jazz.

Music is the universal language that everyone can understand, but this special project also focuses on the language of speech – songs sung in various European languages, including dying languages such as Yiddish and Ladino, carry an additional value for listeners.

Tickets: 35 PLN/25 PLN available in MediaMarkt shops, at ticketmaster.pl and one hour before the concert in the Synagogue. Contact: / phone (text message): 692 804 540.

The project is co-financed from the funds of the Wroclaw Commune (www.wroclaw.pl).

By logging into Visit Wrocław you get special benefits. Check out why you should log in.