John Malkovich on a film set in Wroclaw [INTERVIEW]

One of the most interesting American actors, the star of numerous films (Dangerous Liaisons, In the Line of Fire, Being John Malkovich) or TV series (Billions, The New Pope) appeared in Wroclaw to take part in the shooting of A Winter’s Journey directed by Alex Helfrecht. He talked to us about Wroclaw, films by Polish directors, the new production and fascination with... classical music.

‘I’ve spent much time in Poland for years, but I didn’t visit Wroclaw until 2016. The city enchanted me – it’s interesting, really beautiful and ideal for walks. Brilliant! You’re lucky to live here – I’d like to, too, but such is life...’ John Malkovich told us.

Upon arrival in Wroclaw, the actor visited the Audiovisual Technology Centre (CeTA) to take part in the making of A Winter’s Journey by Alex Helfrecht. And he will return here on 14th August to play in The Infernal Comedy: Confessions of a Serial Killer.

John Malkovich plays the lyre player in The Winter’s Journey

The film being made in CeTA is an adaptation of Winterreise – a legendary cycle of 24 songs by Franz Schubert to lyrics by Wilhelm Müller, where the protagonist is an excluded, lonely, alienated and unhappy wanderer visiting successive villages and looking at people sleeping in their homes or encountered on the way: a postmaster, a beggar playing the hurdy-gurdy, as well as nature: spectral suns, or a soothing roadside lime tree.

In the film directed by Britain’s Alex Helfrecht, the plot is set in Bavaria in 1812, and the protagonist will be a love-struck itinerant poet (played by Marcin Czarnik, a long-year actor of the Polish Theatre in Wroclaw) wandering across the snowy mountain backwoods. The cast will include also John Malkovich (as lyre player), Jason Isaacs (as Wolfgang), Ólafur Darri Ólafsson (in Jakob’s role), Martina Gedeck (Maria) and Gabriella Moran (Therese). The detailed storyline and actions of characters are unknown yet.

John Malkovich’s role in the film is minor. ‘It is a kind of short but distinct cameos. In a similar way, British actor Jason Isaacs or German actress Martina Gedeck appear on the screen,’ the American actor told us. ‘The character of the lyre player alerted me to the issue of contempt for art or music. It is a man for whom art has no value,’ added John Malkovich. He became interested in classical music a few years ago, and the Winterreise cycle is known to him also from performances by his friend, baritone Florian Boesch.

Interestingly, apart from shots with actors starting in CeTA in June, the production will also involve special effects and computer painted animation – the digital version of technology used for the creation of Oscar-nominated Loving Vincent. And the film world will be built – for the first time in a feature film and on such a scale – using Dreams technology known from PlayStation games.

On 14th August, the actor will play in The Infernal Comedy: Confessions of a Serial Killer. It is a quasi-opera, but primarily a drama for one actor, two opera singers (sopranos Chen Reiss and Susanne Langbein) and orchestra (the Orchester Wiener Akademie and, particularly for this project, the Wroclaw Baroque Orchestra).

The production focuses on the life of Jack Unterweger (played by John Malkovich), an Austrian serial killer and writer called the Vienna Strangler, responsible for the death of many prostitutes both in Europe and in the USA. Arrested in 1992, Unterweger was sent to prison in Austria, in which he hanged himself two years later.

In the play, the murderer symbolically returns to take part in a tour promoting the release of his memoirs (he actually did write an autobiography after his first arrest and pseudo-journalistic texts about himself before his second capture). On the stage, he tells the audience about life, love and dangerous relationships. The female singers present on the stage (performing Vivaldi’s, Haydn’s and Mozart’s arias) impersonate Unterweger’s victims. 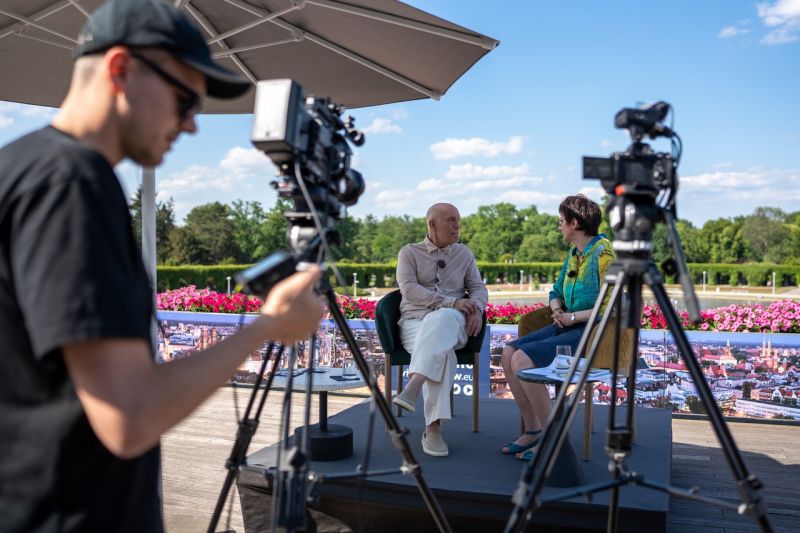 ‘This play is an utter condemnation of a pathological liar who fooled the entire country and killed 11 women about whom we know. I have not checked this very thoroughly, but he did this not only in Austria – also in Czechoslovakia and in the USA,’ stresses John Malkovich, who will play the role of Jack Unterweger in the NFM, in an interview to Wroclaw.pl.

‘Actually, the whole work is one big lie. And the orchestra is present because the protagonist says that his publisher believes this will help him sell the book, which is cynical. And the singers performing baroque arias represent women in his life,’ adds the actor.