Olga Tokarczuk won the 2018 Nobel Prize in Literature. She has been the first Noble Prize winner connected with Wroclaw in the post-war history of the city.

The decision of the Swedish Academy on the award of the prize was announced on 10th October 2019. The justification of the decision said that Tokarczuk was awarded for ‘a narrative imagination that with encyclopaedic passion represents the crossing of boundaries as a form of life’.

‘The Literary Nobel Prize! Joy and emotion have left me speechless. Thank you very much for all congratulations!’ wrote Olga Tokarczuk directly upon learning about the award.

She is the second Polish woman after Wisława Szymborska (the 1996 Literature Nobel Prize) and the first Polish female novelist honoured with the world’s most important award in literature. 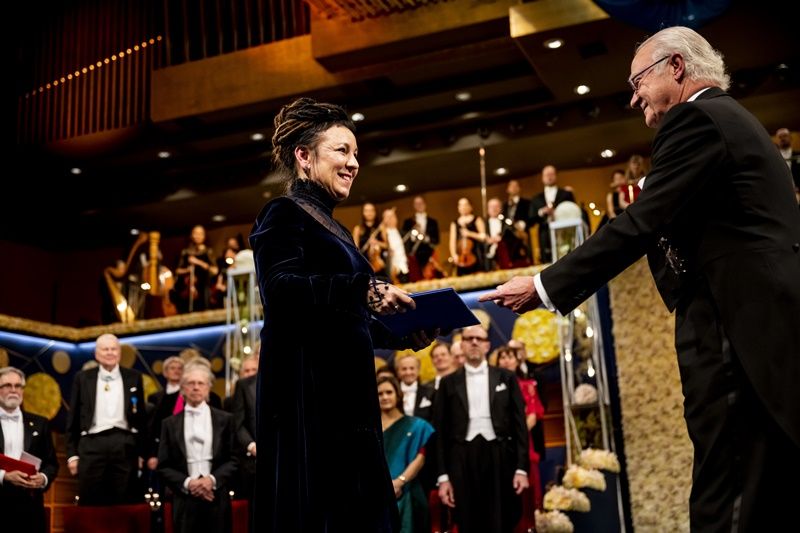 ‘It is a great day for Wroclaw,’ commented the Mayor of Wroclaw Jacek Sutryk shortly after the announcement of the decision by the Swedish Academy.

The writer was born in Sulechów in 1962, studied psychology in Warsaw and worked as a psychotherapist in Wałbrzych. For many years, she has shared her time between Wroclaw and Krajanów near Nowa Ruda, where she has a house. She is the first person connected with Wroclaw who has won a Nobel Prize after 1945.

On Saturday 7th December 2019 in Stockholm, Olga Tokarczuk delivered the Nobel Lecture – a traditional speech given by the laureate before receiving the medal. The writer’s lecture was entitled ‘The Tender Narrator’ and presented in Polish. The keyword binding the whole speech together was ‘tenderness’. ‘Literature is built on tenderness towards any other being than us,’ stressed Tokarczuk.

She remarked that we lack new ways of telling about the world. She talked about the death of the world that we fail to notice and the decline of spirituality. She emphasised the importance of tenderness as the most sophisticated manner of human communication.

The Polish Nobel Prize winner’s speech was acclaimed by the main Swedish dailies Svenska Dagbladet and Dagens Nyheter (the second newspaper published the entire text of the writer’s speech translated by Jan Henrik Swahn, who had translated Olga Tokarczuk’s books into Swedish).

On 10th December 2019, Olga Tokarczuk received a gold medal and a diploma from the King of Sweden Carl XVI Gustaf, thus becoming officially the laureate of the 2018 Nobel Prize in Literature.

See the coverage of the ceremony.

After the ceremony, the laureates took part in an official party that was attended also by the King of Sweden Carl XVI Gustaf.

The Nobel Prize is also a financial reward. Olga Tokarczuk received 9 million Swedish kronas, which is equal to around 3.6 million PLN,’ informed the TVN24 news channel.

Selected novels and other works by Tokarczuk:

Olga Tokarczuk has won the Nike Literary Award (twice) and the Polityka’s Passport Award. In 2018, she received the Man Booker International Prize (one of the world’s most prestigious literary awards) for her novel Flights translated into English by Jennifer Croft.

Welcome of Olga Tokarczuk in Wroclaw

On 20th December 2019, thousands of readers and fans were waiting for the Nobel-winning writer in the National Forum of Music and in front of the outdoor screen at Plac Wolności.

The winner of the Noble Prize in literature and the Honorary Citizen of Wroclaw was welcomed by the Mayor of Wroclaw Jacek Sutryk, who reminded the audience that Tokarczuk was coming back home to the city that had also been a home for Tadeusz Różewicz, Rafał Wojaczek and Tymoteusz Karpowicz.

He referred to the ceremony of granting the title of Honorary Citizen of Wroclaw to the writer that took place in the City Hall in June 2019.

Jacek Sutryk said: ‘Olga, when you were receiving the honorary citizenship of Wroclaw, you said: “This city was founded after the war on a great historical paradox: hailed as a fortress and doomed to annihilation by its German defenders, it was rebuilt with love by newcomers, immigrants and new settlers." Let’s say it again: with love. I was listening to you at that time, and I read those words many times later. I realised that I see and understand our city in the same way. As something founded on love. And, although the post-war restoration process is almost completed, Wroclaw will not be a finished and closed city, after all. We will continue to erect it, and I believe we will do it together, regardless of political differences.’

In October 2020, Olga Tokarczuk’s Foundation was established. Its seat is the villa at ul. Krzycka 29, in which Maria and Tymoteusz Karpowicz lived until the 1970s and which the city has granted to the foundation. According to the wish of Karpowicz – a poet, prose writer and dramatist, it will be used as a workplace for writers and for meetings with readers.

The Foundation’s tasks encompass cultural and artistic activity, ecological projects towards equal treatment and the support of development of civil society.

The Foundation lays emphasis on women's matters. ‘I am a writer and literature is my natural element, but there are also spheres of life to which I pay attention not as a writer and Nobel Prize winner, but as Olga Tokarczuk. These are mainly women, their talents, their lives, but also exclusion from various spheres and the time when women are girls and plan their life,’ says Olga Tokarczuk.

Animals’ rights are also particularly important. ‘The Foundation can freely dissolve and we can all go home when we manage to bring animals’ rights into the constitution of Poland as well as other countries in the future. We will act in this direction, remembering Gandhi’s old maxim that every idea at first arouses outrage, then laughter, and finally becomes taken for granted,’ adds the Nobel Prize winner.